10/22 “Letter supporting Nixon is signed by over 1,000” – The letter sent to Nixon expressing support 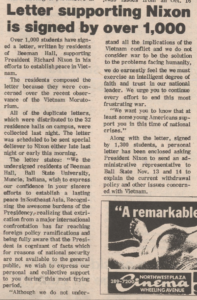 10/23 “I.U. fires SDS leader” – A faculty member at I.U. was fired for professional misconduct for participating in demonstration. 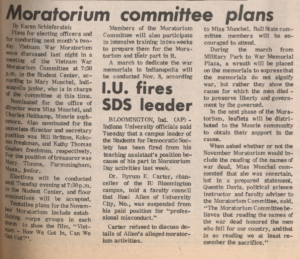 10/24 “Newman’s M-day” – Expresses support for the Newman Apostolates, the only religious group on campus to support the moratorium. Father Ron Voss and Father James Bates are commended for upholding their principles. 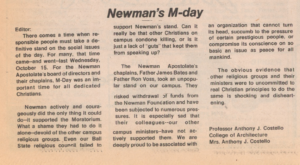 10/28 “Newman obligation” – Bates and Voss state that they support the pursuit of peace, rather than a specific side of the Vietnam War.

10/29 “Newman decides to support November Moratorium” – A report on the Newman Pastoral Council that details the debate over Newman’s involvement in the upcoming November Moratorium. Ultimately, they opt to create paths for Newman students to get involved. 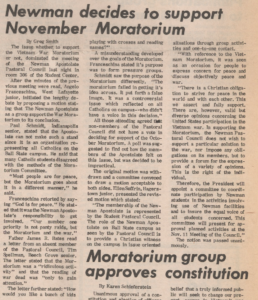 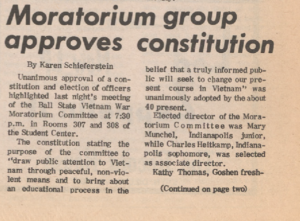 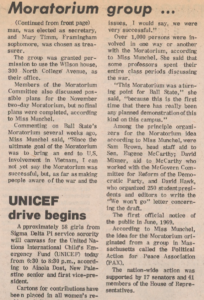 10/31 “November Moratorium days to omit reading of war dead” — The VMC aimed to avoid the misunderstandings and conflicts from the October Moratorium. Plans for November included handing out leaflets, lighting a memorial flame for 48 hours, showing films on war, and a parade to Muncie courthouse. The Black Student Union also announced their support. 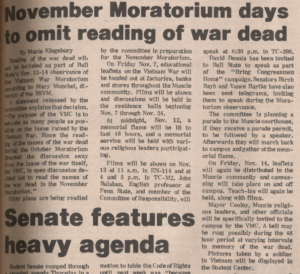 10/31 “Apology given” – Newman Council Member apologizes for not clearly sharing plans in advance of of the October Moratorium, especially the “emotionalism” of the white crosses. 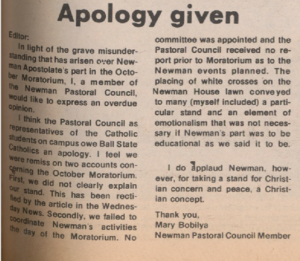 10/31 “Newman to stress ‘concern for peace’” – clarifying yet again that they are not supporting a particular solution. 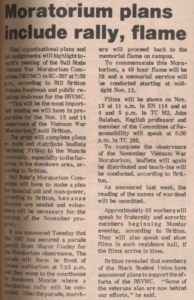 11/5 “Father Voss, Crane debate” – Describes plans for a debate on religious group participation in VMC activities between Father Voss and a campus minister from ISU. 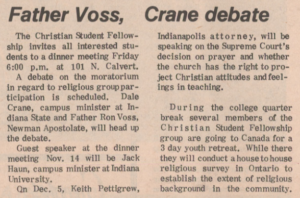 11/6 “Act of treason” – A letter asserting that the VMC was started by communists and seeks to sabotage The United States. 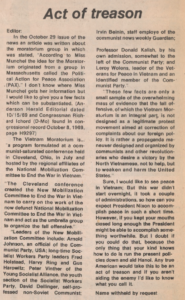 11/7 “October Moratorium effects measured” – Describes Nixon’s attempts to restrict public action and his subsequent review of the situation in Vietnam. 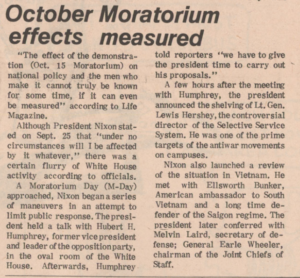 11/7 “Religious Council adopts alternative” – passed a motion to support education about Vietnam War by creating a moderated,  space for dialogue. The Council avoids associating with the VMC or taking a position. 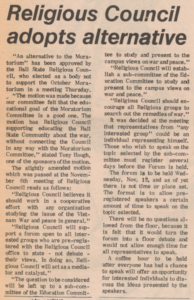 11/7 “Students plan for rededication, march” – About 50 students from Ball State plan to attend rededication of the War Memorial in Indianapolis.  Another 30 students plan to go to nation-wide march in Washington, D.C. on November 15th. Most of Ball State’s action will take place on campus. 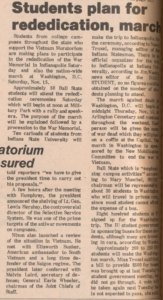 11/7 “Faculty, administrators, organizations evaluate Moratorium observances” –  Many interviewed thought the Moratorium went well. Some expressed concern at the VMC’s structure and the time constraints for planning the October Moratorium. These concerns seem built into the planning for the November Moratorium. 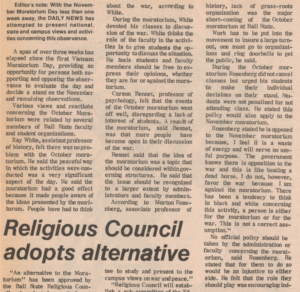 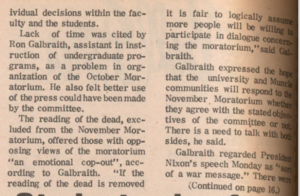 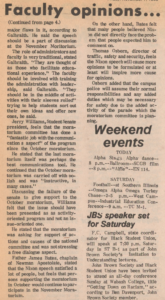