10/15 “M marks the day” – Published on the day of the October Moratorium, this editorial implies that we cannot support the men at war while opposing the war itself. 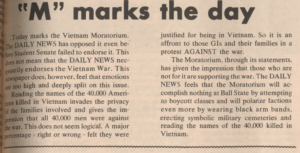 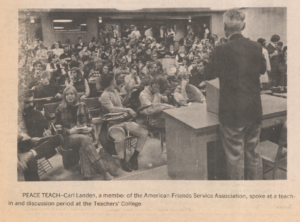 10/16 “Vigil goes all night” – 120 students gathered at beginning of reading of names, which lasted all night.  150 students attended special mass. 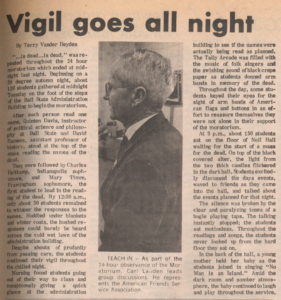 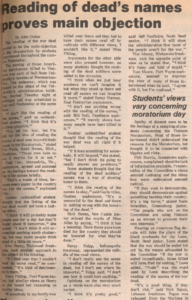 10/17 “Residents’ letter support Nixon policy – Beeman Hall residents signed a letter supporting Nixon and asking others to have more faith in the government. 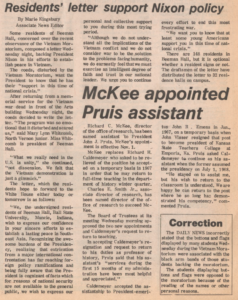 10/17 Letter to editor by Don E. Blom – Blom served as a clinical psychology specialist at the Army’s Medical Training Center. He states that most of the soldiers he interviewed did not want to go to Vietnam and that reading their names did not indicate how they felt about their service.  Blom participated in name-reading.

10/17 “What is happening?” – Casts doubt on VMC, describing it as a shady organization started in East Germany. 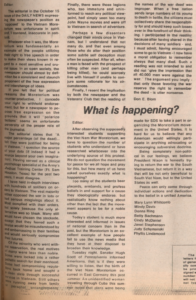 10/17 “Open letter from Vietnam” – A student’s father (a colonel) wrote to her from Vietnam stating that he was against the war – she would not want his name read if her were killed. 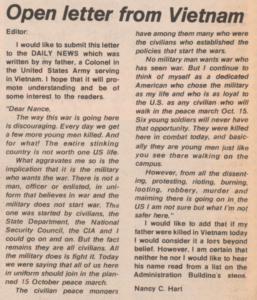 10/17 “Nixon and Vietnam” – Argues that Nixon should listen to the people. 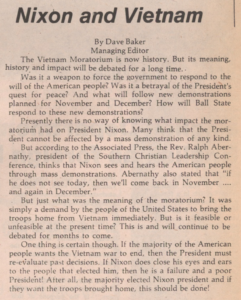 10/20 “Moratorium betrayal” – Argues that the Vietnam war is a just cause and soldiers would oppose the VMC. The article goes on to criticize the VMC for projecting their political beliefs onto dead service members. 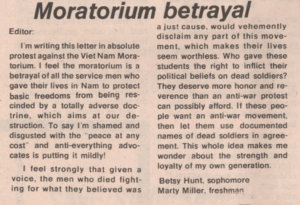