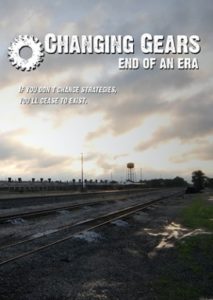 From 2009-2011, Ball State’s Institute for Digital Education and Entertainment and the Center for Middletown Studies jointly produced Changing Gears, a feature-length documentary film about the 2009 closing of Muncie’s century-old Warner Gear auto parts plant and the loss of industry in the city. The project was funded in part with a grant from Ball State’s Office of the Provost.

Conceived as a bookend to the investigation of work and community in Robert and Helen Lynd’s original Middletown (1929), the film explores the meaning and significance of industrial decline in Muncie by examining the experiences of the plant’s workers, the fate of their union, and the closing’s impact on the community.  Fifteen students participated in the filming, editing, writing, and historical research connected with the film as part of an immersive learning experience.  Their work produced both a film, which aired on PBS stations throughout the United States, and a digital archive documenting the history of the plant and the experiences of the men and women who worked there.