All for Want of a Button

How Napoleon’s Battle in Russia Helps Me Teach Chemistry

Two hundred years ago, Napoleon’s army took on the Russians in a battle that marked a major strategic setback in the French invasion of Russia.  In the end, only 10,000 Frenchmen out of more than half a million made it out of Russia alive.  Some historians believe that this setback was not due to lack of military force, but rather to the greatest wardrobe malfunction of all time: The French army used tin buttons to secure their uniforms, unaware that tin forms many allotropes – some of them not at all suitable for frigid Russian winters.

What Are You TALKING About? 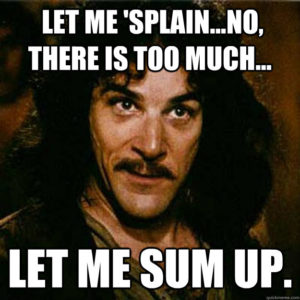 Have I lost you already?  What in the world is an allotrope?  Why did this matter to the French soldiers? Good questions.  Let’s see if we can figure it out.

Allotrope is a word that chemists use to explain that many elements exist in different physical forms.  Carbon, for example, is found in graphite, charcoal, and diamonds, but each of these forms are still made of the same thing: carbon atoms.  It’s just that the carbon atoms in your pencil lead are bonded together differently than the carbon atoms in a diamond engagement ring are.  Because they are stuck together in different ways, they not only look different, but these allotropes function differently, too.

Just like carbon, tin has several allotropes.  The primary structures that tin forms are called alpha-tin (written like this: α-tin), and beta-tin (β-tin).   These two types of tin have very different characteristics because of the way their atoms are bonded.  It turns out that β-tin is silver in color, metallic, and pretty malleable – it can be hammered into shapes without breaking. In other words, it seems like a great material to use for buttons… but β-tin isn’t very stable in cold temperatures (Russian winters, anyone?) – when the temperature drops below about 13°C (or around 56°F), β-tin spontaneously transforms to α-tin, which is brittle and powdery: not a great attribute for something that is going to be holding your winter coat together.  Unfortunately, it seems that the French army wasn’t aware of this cold-weather transformation: their buttons quickly transformed from solid, shiny tin to brittle tin flakes that shattered in the harsh climate.  Of course, the cold wasn’t the only cause of their retreat; Napoleon’s Grande Armée faced disease, desertions, and deaths throughout their campaign.  But let’s face it: being unable to button your coat in the face of snow, high winds, and sub-zero temperatures would make anyone want to give up and turn toward home! 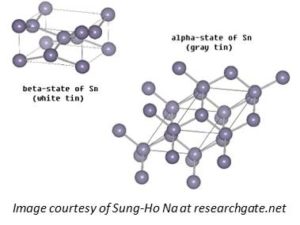 Napoleon’s invasion of Russia happened a long time ago, and obviously, we now know about tin’s tendency to transform in the cold.  So why does this matter?  It matters because Napoleon’s experience helped us to understand crystalline structures.  We know now that β-tin’s atoms line up neatly in cubic

structures, while α-tin has a more complicated structure.  Take a look at the picture below.  It’s easy to see how the cubic structure of β-tin would be able to pack together closely to make a smooth, solid crystal.  The atoms of α-tin, on the other hand, are less organized.  Those differences in structure explain why α-tin and β-tin look different AND behave differently.

Over the summer semester, I am working to create and redesign lab experiments for general chemistry students at Ball State University.  One of the things that I’d like for them to understand is that, when it comes to chemistry, not everything is black and white.  In chemistry, as in life, most things have grey areas:  Hydrogen is a gas, but it’s lined up with metals on the periodic table because sometimes it acts like one.  We often teach students to say that bonds between atoms are either ionic or covalent… but really, most bonds exhibit characteristics of both. Crystals that are formed of the same atoms can look and act very distinctively, like carbon does, or in this case, α-tin and β-tin. 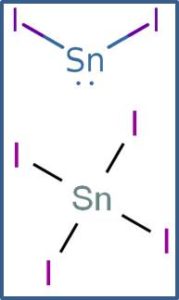 I designed an experiment for second-semester chemistry students that illustrates this very point, and it uses tin!  In this experiment, I’d like students to focus on the spectrum of ionic-covalent characteristics (with ionic on one side of the spectrum and covalent on the other).  The same tin is reacted in two different ways to create compounds that bond differently as a result of tin’s variable characteristics.  Both reactions will create an orange powder when the tin reacts with iodine.  But in one reaction, each atom of tin will end up with two atoms of iodine, and in the other reaction, each atom of tin will have four atoms of iodine: same elements, slightly different structures (take a look on the right).  Even though the differences are small, they create products that react very differently. One product is soluble in water and the other isn’t.  One conducts electricity and the other one doesn’t.  Each product reacts in an individual way… because chemistry principles aren’t black and white:  like the properties of tin, they often exist on a spectrum.

It seems odd to say that I can look at Napoleon’s story and use it to help teach chemistry, but I think that one of the most important lessons that Napoleon’s story can teach us as scientists (and non-scientists, too) is that we should try not to see things in only black or white, right or wrong, good or bad.  There’s often a spectrum of gray in there that’s important for us to recognize and try to understand.  It’s important to take a look at what you think or believe to be true, evaluate it, and be willing to make changes if necessary.  Recognizing mistakes and bad ideas is essential; this is why scientists are always learning, always revising ideas, always trying to understand how things work.

As I was creating my tin experiment, I found a lot of ways that the experiment didn’t work!  At one point, I was certain that I had considered every angle and that my product was the one I was looking for… only to realize days later it it was something completely different.  I had to go back to the drawing board and re-evaluate my process. As a result, I created an even more effective experiment than the one I started with!  One of the things we have to learn as scientists is to refuse be discouraged by mistakes.  We all make them; don’t quit!