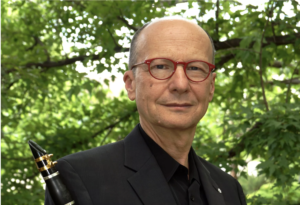 James Campbell has been called “Canada’s pre-eminent clarinetist and wind soloist”, by the Toronto Star. He has performed as soloist and chamber musician in over 35 countries with over 65 orchestras including the Boston Pops, Montreal Symphony and the London Symphony. He has collaborated with Glenn Gould and Aaron Copland and toured with over 40 string quartets, including the Guarneri, Amadeus (when he replaced an ailing Benny Goodman on a tour of California) and Vermeer.

Of his over 50 recordings, the BBC and The Times of London rated his recording of Brahms’ Clarinet Quintet as the best available, while his CD Stolen Gems (Marquis Records) won a Juno.

He has been named Canada’s Artist of the Year, awarded the Queen’s Gold and Diamond Jubilee Medal, an Honourary Doctor of Laws, and the Order of Canada.

James Campbell has been Artistic Director of the Festival of the Sound since 1985 and was Professor of Music at the famed Jacobs School of Music of Indiana University from 1988 to 2019. He continues to give master classes throughout the world.