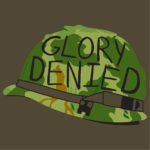 Based on a book by Tom Philpott, Tom Cipullo’s Glory Denied tells the true story of Colonel Jim Thompson, America’s longest-held prisoner of war. The opera deals not only with Thompson’s suffering in the jungle of southeast Asia during the Vietnam War, but also the tragic aftermath that followed his liberation.

Sung in English, the performances will include full sets, costumes, and chamber orchestra.

Sung in English with projected titles.
Run time: approximately 1 hour and 30 minutes including one intermission
Streaming rights until April 2022.

Thanks for watching our streamed performance of Glory Denied. Two-thirds of the opera’s budget comes from in-person ticket sales in a typical year, so if you watch please consider donating the cost of a $15 ticket to our foundation account.